At the center of the University of Southern California’s University Park campus lies the heart of the Trojan athletic tradition, Heritage Hall. Originally opened in 1971, Heritage Hall has served as the home of USC's Department of Intercollegiate Athletics for more than 50 years. The renovation of this facility included structural upgrades, a full high-end interior build-out, new exterior glazing, and plaza improvements. Key features include the central lobby known as the Hall of Champions, a multi-purpose room, team locker rooms, coaches’ suites, and administrative and related support spaces. 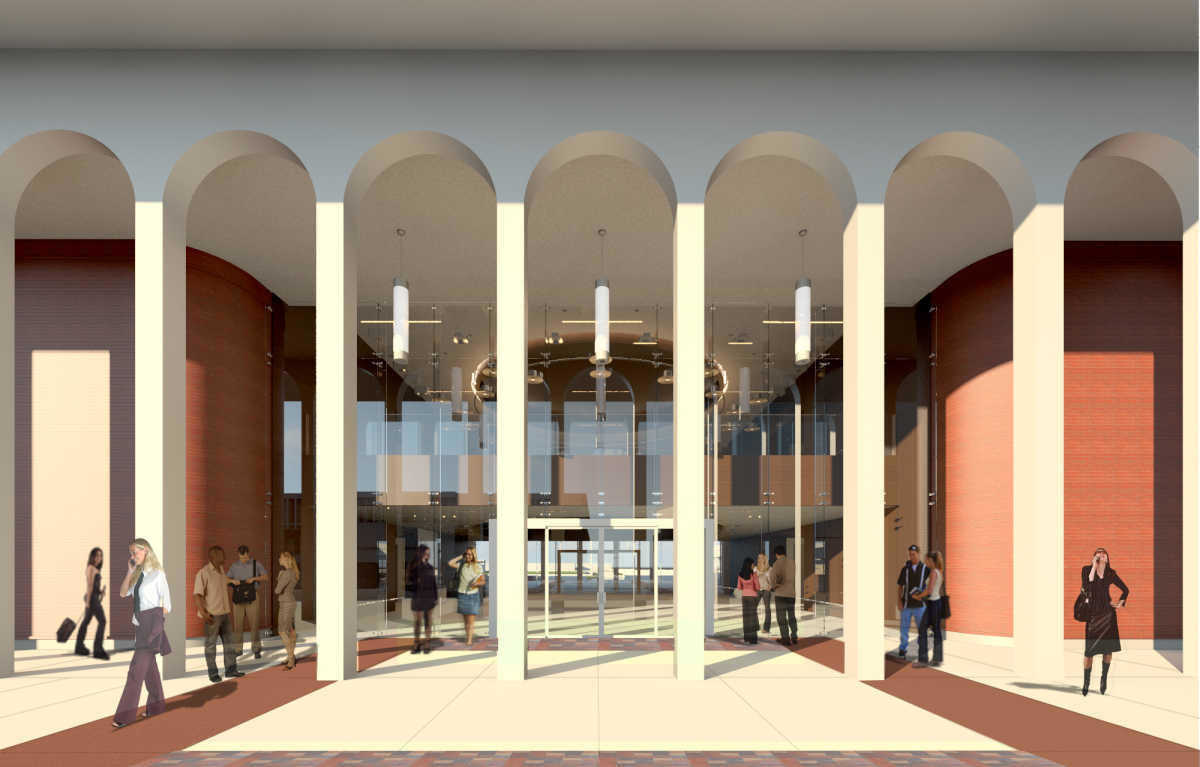 The modernization of Heritage Hall gave USC the opportunity to celebrate both the rich history and future excellence of its athletic tradition. The two-story main lobby of Heritage Hall is now a light-filled Hall of Champions featuring a Spirit of Troy exhibit space, which celebrates USC athletes’ achievements: NCAA Championships, Heisman Trophy winners, Olympians, legendary coaches, student athletes, and highlights of USC's 21 athletics programs. The lower level, accessible only to student athletes and athletic department staff, features a lounge for Women of Troy student-athletes, a new rowing room with 35 indoor ergometers, a new golf simulation lab with a virtual indoor driving range and 6-hole putting green, and other spaces that support student-athletes and assist in recruiting.

The scope of work for this project comprised a complete renovation of the existing 70,000 SF building that relocated existing services and provided new spaces for athlete programs. The two-story central lobby and athletic department offices on the first and second floors now feature floor-to-ceiling windows with views to practice fields and USC’s campus. The renovation added offices for USC athletic administrators and coaches, a sports performance center, and a dedicated television studio with a direct feed to the Pac-12 Network. The addition of skylights throughout the corridors and internal spaces of the lower level allow natural light to penetrate the space. An outdoor plaza was enhanced with decorative paving, landscaping, and a fountain. The renovation provided a much-needed facelift to this world-class athletics building.

In order to update the historic façade, the bronze tinted glazing was replaced with a clear structural glass system, leaving the historic mid-century colonnades intact. The Heritage Hall renovation project also enhanced the outdoor plaza spaces surrounding the building with new decorative paving, updated planting, a water feature, comfortable lounge and dining furniture, and modernized at-grade skylights. A small existing ancillary building was converted to a VIP conference room and lounge complete with upgraded finishes, a catering kitchen and indoor fireplace. Noble Plaza, located on the east side the building, serves as the front door of Heritage Hall and its connection to the center of campus. Wood Plaza was re-envisioned to provide an outdoor gathering space for the campus and continuation of the recruit path to the neighboring John McKay Center. 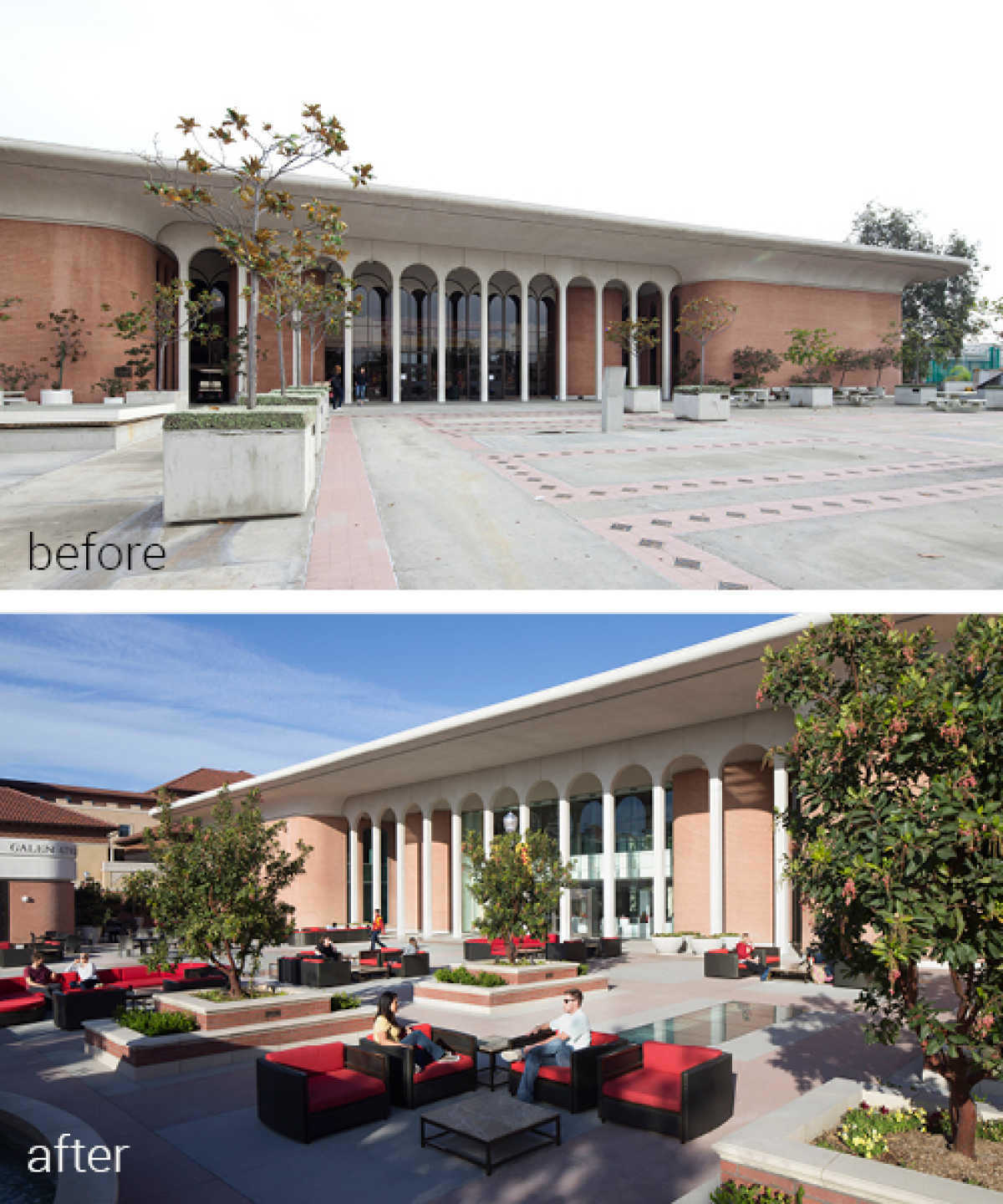 The building interior has been completely transformed using sophisticated materials and rich colors. All-new millwork and furniture has modernized the spaces, creating an environment that is both comfortable and elegant. New environmental graphics and exhibit pieces that celebrate USC Trojan pride occur throughout the building, with enhanced quality of light due to increased daylight and light-colored reflective surfaces.

The new Heritage Hall experience is established at the main entry through the Hall of Champions, where a dramatic new “championship ring” frames the opening between the first and second levels and calls attention to the new exhibit gallery beneath it.

The lower level of the facility is only accessible to student athletes and athletics staff members using a secure biometric access system. In addition to housing student and staff locker rooms, the lower level includes the coaches’ offices for the Golf, Lacrosse, Soccer, Rowing, and Tennis teams. These offices are located within a single suite to encourage interaction and camaraderie amongst the various programs. They are also branded using sport-specific imagery and bold graphics to clearly direct guests to the appropriate office. An important design feature of the lower level is the addition of skylights throughout the corridors and internal spaces which bring natural light to its occupants.  Unique spaces aimed at enhancing the student athlete experience and attracting future talent are also located in the lower level, including the following: 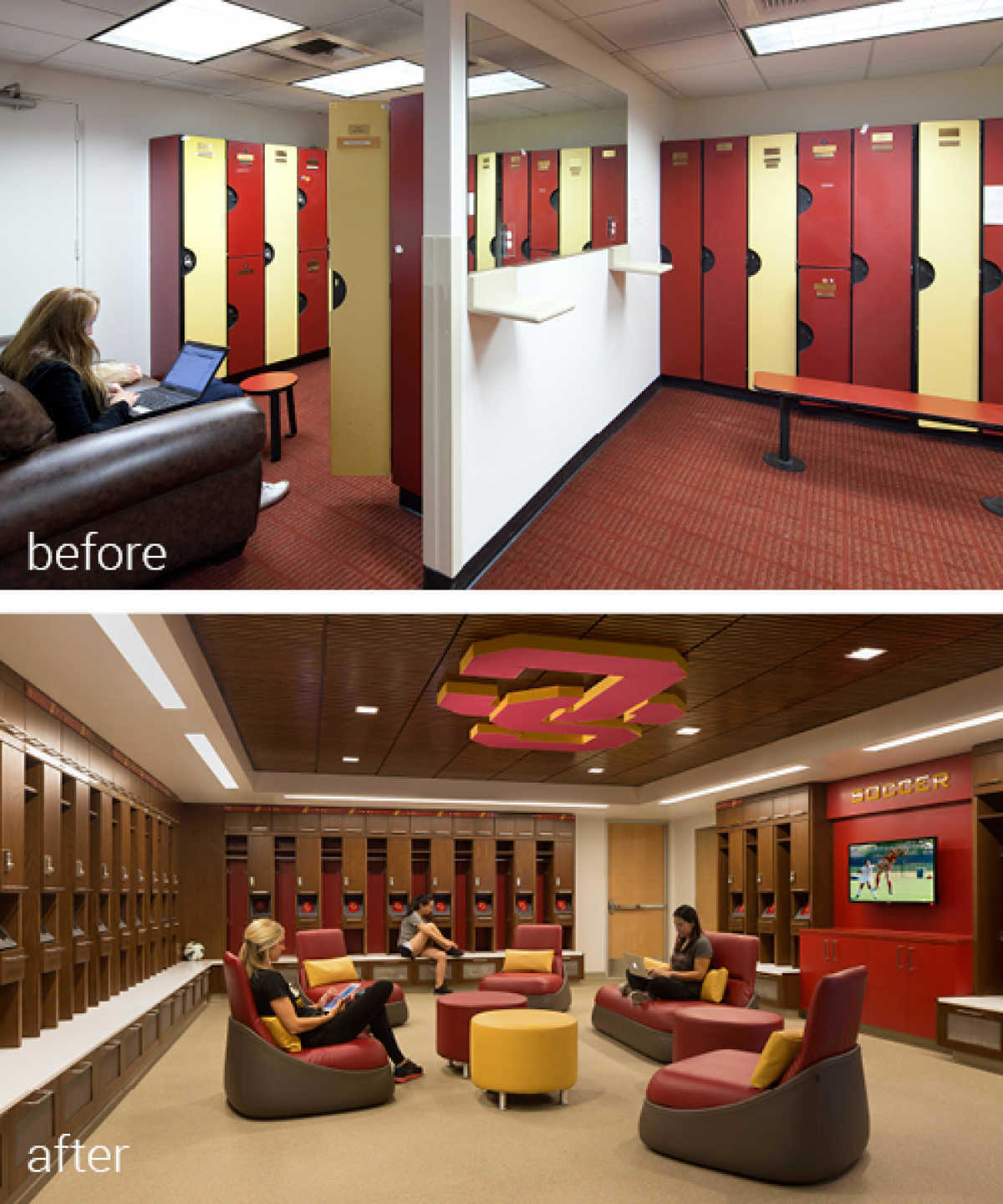 APPRECIATE THIS PROJECT
The [project/profile] has been shared.